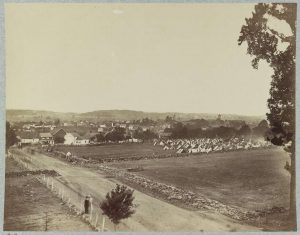 East Cemetery Hill — The Battle of Gettysburg was fought July 1–3, 1863, in and around the borough of Gettysburg, Pennsylvania. On one side of the soon-to-be carnage-filled arena, the Union forces. On the other side, waiting to get their licks in — Confederates. A deadly war was coming to sanguine fruition. A war that ripped a nation in half. The ghosts, literal and figurative, are palpable in the entire town of Gettysburg, the history giving birth to hauntings unlike any other in America.

The battle was renowned on account of its casualties. It was a bloodbath that involved the most significant number of losses during the Civil War. It was a spectacle swamped in the inhumanities and slaughter of its men and, fortunately, a significant turning point in the war’s trajectory.

Initially known as Raffensperger’s Hill, East Cemetery Hill witnessed a bloody encounter that could have completely compromised the Union’s position at Gettysburg.

If you’re daring enough to visit the hallowed ground at Gettysburg, join us for a hauntingly fun and historically accurate Gettysburg ghost tour with Civil War Ghosts during your stay!

In the humid midst of summer, on July 1st, 1863, the bloody Battle of Gettysburg would commence. Union Major General Oliver Howard chose Cemetery Hill to serve as the headquarters for his Eleventh Corps. His decision to fortify the hill would later earn him the Medal of Honor and earn the hill the status of one of the most haunted locations on the battlefield.

To compensate for this tremendous loss, the 25th Ohio extended a formation into the ranks. At 7:30 that night, Major General Early ordered two brigades to attack East Cemetery Hill. The Confederate attack began with great promise — darkness and smoke acted as a shield for the oncoming men, ‘escaping what in the full light of day could have been nothing else but horrible slaughter.’

Soon, Early’s attack was succeeding. Despite hefty resistance from Union artillerymen, the crest of East Cemetery Hill fell to the Confederates. Nine cannons fell into their hands, and they captured one of the most significant fortifications on the battlefield. 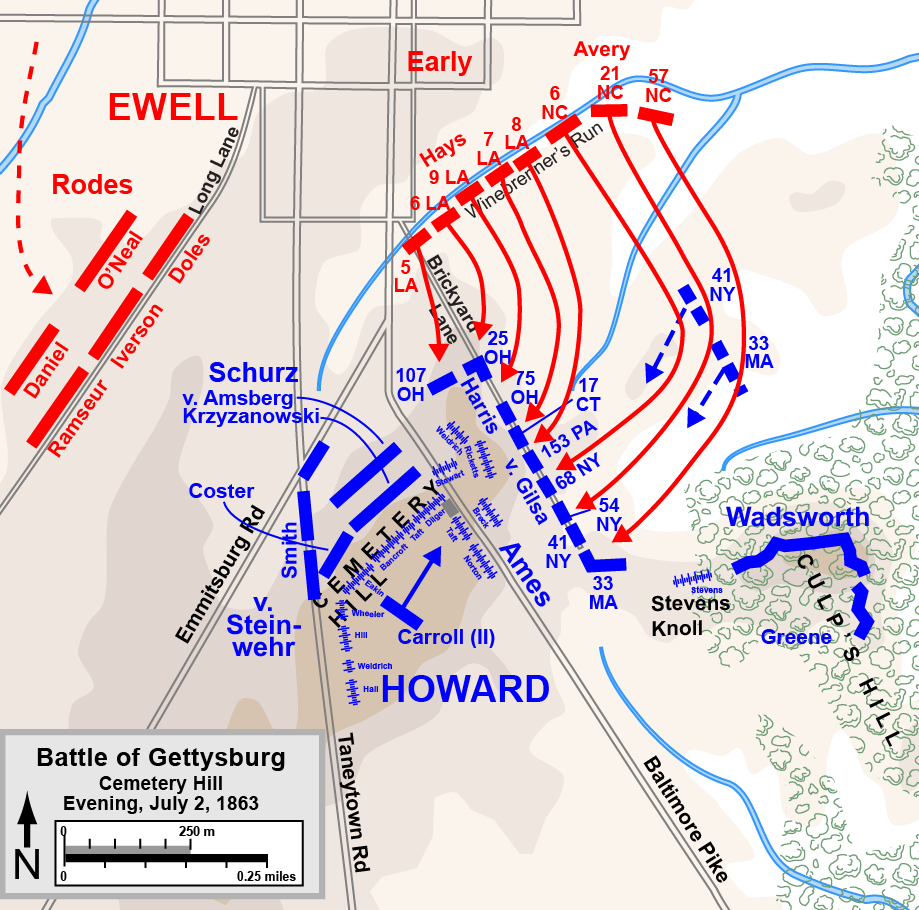 The lines were drawn at Cemetery Hill in July of 1863. Source: Wikimedia Commons

Time would not prove kindly to the Confederacy, however.

A stream of Union reinforcements poured onto the hill; the outnumbered Confederate troops struggled to hold their ground. By the time Confederate reinforcements arrived, Generals were forced back down the hill, giving up critical land and leaving the Union cannons as they were.

East Cemetery Hill would later become the first battlefield park in August of 1863. The first land preserved at Gettysburg was the plot where the cannons were captured, and from this small area sprung the entirety of the Gettysburg National Military Park.

Historians of the Battle of Gettysburg have long recognized the essential nature of the high ground at Cemetery Hill. None of the many hills and ridges that run along the battlefield were more vital to the battle or its outcome.

Soldiers knew this as well, with one Union officer stating that ‘it is the only position.’

After Union troops rallied on Cemetery Hill, the remaining Confederate soldiers occupied the town — their front line ran less than two hundred yards from The Inn at Cemetery Hill, a historic inn located in the heart of it all in Gettysburg.

Throughout the remaining days of the battle, Confederate troops engaged in deadly duels with Union troops. During every daylight hour, rifle fire pierced through the summer air, and the sound of cannons carried itself like a heavy ghost over the town.

Throughout the battle, the hill was a crucial position for Nothern artillery, with more than fifty cannons occupying the hill at one point. Original cannons now mark the places where the Union guns once stood.

Along with being the very first section of the Gettysburg National Park, it was also designated a cemetery — and over 3,500 dead were interred at the hill between the autumn of 1863 and the spring of 1864.

These days, the land itself is believed to be one of the most haunted hotspots on the Gettysburg battlefield. It’s no surprise that there are close to 4,000 people buried beneath the soil there.

There are stories of apparitions following guests throughout the halls of the Inn, watching them sleep, and causing disturbances in the middle of the night, such as knocking on the walls, opening doors, and messing with personal belongings.

One guest reported hearing a man wheezing in the darkness of night, only to wake up to see half of an apparition, just the torso, and head of what looked to be a Confederate soldier standing at the foot of the bed, gasping for air. Could this have been the forlorn ghost of a man who lost his life on the battlefield?

As for Cemetery Hill itself, it carries the same energy as the rest of the battlefield — the echoing phantom sounds of war shroud the land in a dark blanket of energy, never allowing the dead to move on from the trauma and tragedy that occurred during the summer of 1863 there.