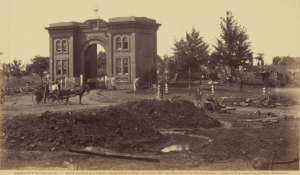 Evergreen Cemetery, also once known as Citizen’s Cemetery, is a historic almost 30-acre rural cemetery located just outside of Gettysburg. It is part of the Gettysburg Battlefield Historic District and is surrounded completely by the Gettysburg National Military Park and the Soldiers’ National Cemetery.

Evergreen played a strategic role in the Battle of Gettysburg, which you’ll learn about later in this article. Four months after the battle had ceased, President Lincoln delivered his ‘Gettysburg Address’ from a platform in Evergreen Cemetery.

Looking to experience the hauntings of Gettysburg for yourself? Join us for a Gettysburg ghost tour.

The Ever Green Cemetery Association of Gettysburg was established in November of 1853 at a meeting. The association managed the property and oversaw the selection of cemetery caretakers. By April of 1854, 118 lots had been sold and the first internment took place on October 29th that same year.

‘could a more lovely spot have been chosen?’

Evergreen Cemetery’s gatehouse was designed by Philadelphia architect Stephen Decatur Button, and built by a couple of local contractors. It was completed in November of 1855 and served as the residence for the caretaker.

Evergreen Cemetery is well known alongside the name Cemetery Hill, which is a location that was noted as the keystone of the Union position during the Battle of Gettysburg. Major-General Oliver Otis Howard lined the cemetery’s high ground with cannons, basically turning it into an artillery platform and turned its gatehouse into a makeshift Union army headquarters.

It was dusk on July 2nd, 1863 when five Louisiana regiments under Brigadier-General Harry Hays and three North Carolina regiments under Colonel Isaac Avery commenced the battle at East Cemetery Hill. They charged toward Howard’s artillery batteries from the east and some of the batteries even used the grave monuments for shelter from enemy fire, laying against the ground on graves of the deceased to save their skin. Two Confederate soldiers mortally wounded during the battle were buried in the cemetery.

Evergreen experienced three days as a battlefield, and its resulting condition left a Union officer to lament about it:

‘A beautiful cemetery it was, but now is trodden down, laid a waste, desecrated. The fences are all down, the many graves have been run over, beautiful lots with iron fences and splendid monuments have been destroyed or soiled, and our infantry and artillery occupy those sacred grounds where the dead are sleeping. It is enough to make one mourn.’

In 1972 the Evergreen Cemetery archway house was designated a ‘historic district contributing structure’ by the Gettysburg Borough Council.

Ginnie (Jennie) Wade: the lone civilian casualty of the Battle of Gettysburg

A Woman in Bronze at Evergreen Cemetery

As one enters the cemetery, the statue of a woman in bronze is seen. Many mistake this statue to be of Jennie Wade, but it’s actually that of Elizabeth Thorn or the Angel of Gettysburg. Elizabeth is responsible for taking care of the cemetery in her husband’s absence during the Civil War.

Elizabeth and her husband Peper were married in Gettysburg in 1855 and a few months passed before Peter was hired as the caretaker of the Evergreen Cemetery. Peter later enlisted into the 138th Pennsylvania Infantry, never dreaming that the war would come so close to home.   In July of 1863, he was off fighting in Virginia when the Confederates arrived in the small town of Gettysburg.  In his absence, Elizabeth took over his duties as the caretaker of the town cemetery.

As said in Lincoln’s address, Evergreen Cemetery is ‘dedicated, consecrated hallowed ground,’ and this is proven when one enters the cemetery, day or night. The ghosts of the battle who are buried there seem to be active and well, appearing to visitors as apparitions and orbs, as glimpses of light and a light touch.

As part of the much larger battlefield, the Evergreen Cemetery remains one of the more active haunted locations in Gettysburg. A city overrun with ghosts, it seems.