Haunted Gettysburg has a lot in store for history buffs and ghost lovers. Dive in with the Farnsworth House Inn in Gettysburg on a ghost tour by US Ghost Adventures. 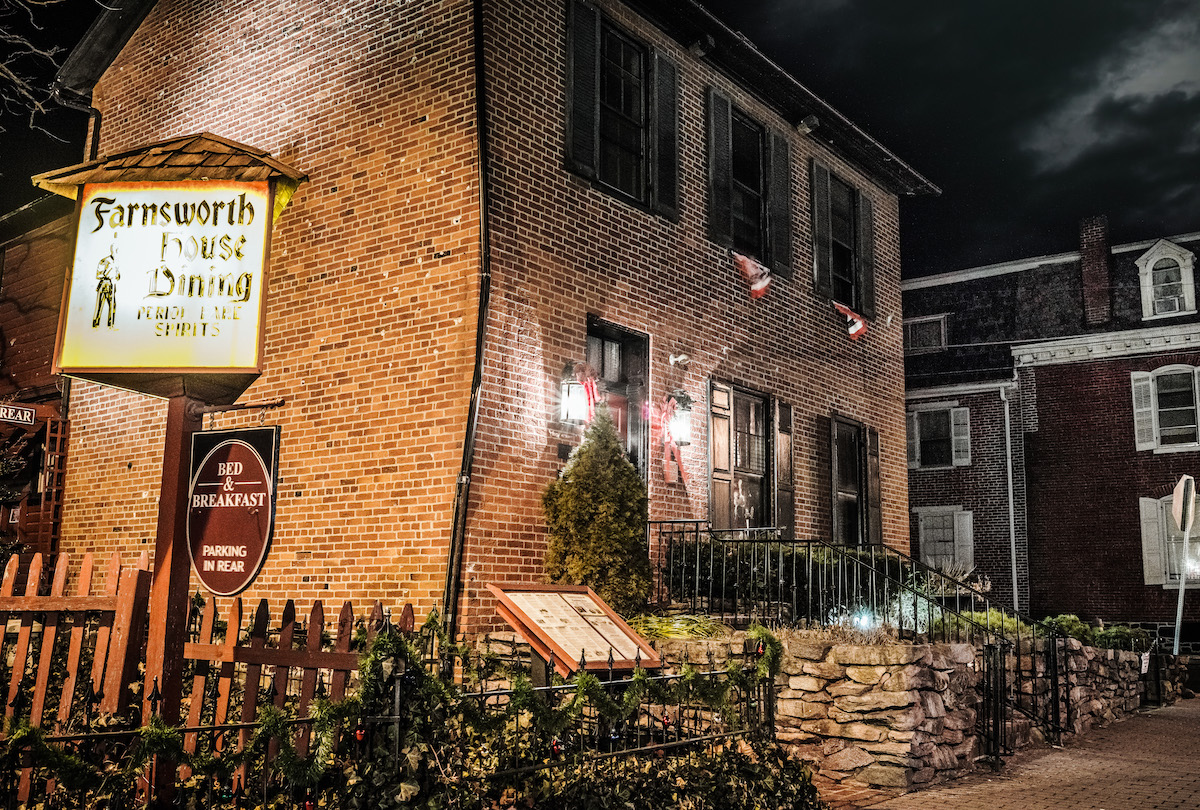 Gettysburg was the site of the most decisive battle of the entire Civil War, where the commander of the Union Army of the Potomac, George Meade, led his troops to a decisive victory against the Confederate commander Robert E. Lee.

But not every skirmish in this battle was triumphant, and the scars of those failures rip into the blood-soaked battlegrounds.

Step into the past with US Ghost Adventures’ tour of haunted Gettysburg, Pennsylvania. Hear sabers and rapiers clanging in the still of midnight and the boots of lost soldiers of battles drawing ever closer to your door at the Farnsworth House Inn.

Farnsworth House Inn is one of the most haunted buildings in Gettysburg, named after Brigadier General Elon John Farnsworth. Farnsworth commanded a faction of the Union Army and led them into a disastrous charge based on incorrect information that resulted in the deaths of Farnsworth and all 65 of his men.

Today, the Farnsworth House Inn is a registered historical site, but visitors will get more than a history tour here. Reports abound of a pitch dark, foreboding energy roiling in the air of the house. “Everything in you screams ‘GET OUT!’,” claimed one visitor.

During the battle, sharpshooters from the Confederacy overtook the house and used it as their sniping station. The most infamous civilian death of the whole battle was that of Jennie Wade, who was killed by a Confederate soldier supposedly hiding out in the Farnsworth House Inn. One of the sharpshooters missed his target, and his bullet pierced the wall at the home of the innocent civilian Jennie Wade. It struck her dead while she baked bread for the soldiers. There is, however, an alternate theory that may prove more accurate which has the sharpshooters using the Welty House as their headquarters. This theory states that because the Welty House was farther up the street at a higher elevation, it is more likely this is where the “magic bullet” came from.

Later, the house was in the crossfires of bullets shot by opposing armies. All of the bullet holes remain in the house’s exterior today, and from the upper level, one can see the bullet hole that entered Jennie Wade’s house that fateful night. The Jennie Wade Room in the inn preserves her memory.

The current owners of the Farnsworth House Inn claim that 16 different ghosts live within its walls. They all have names, and they all have distinct personalities. As you might guess, there are many soldiers, but also a mischievous eight-year-old boy and a hardworking midwife.

The inn was transformed into a hospital after the sharpshooters cleared out, so even more deaths occurred on its premises as nurses struggled to keep soldiers alive. Confederate ghosts rub shoulders with the Union spirits. You can see them patrolling the grounds, stalking up and down the staircase, and creating pockets of frigid cold wherever they linger.

The scent of cigars, the echoes of heavy breathing, and the disembodied notes of a Jew’s harp also have pestered Farnsworth staff as they go about their jobs.

The ghosts of Gettysburg and the civil war are so real that multiple visitors have approached them and tapped them on the shoulders, thinking they were tour guides! Join US Ghost Adventures to see the eerie side of Gettysburg and its bloody, battle-torn, and haunted history with the battlefield encompassing the entire town, its buildings, its civilians, and the soldiers that occupied it for the bloodiest three days in America’s history.