Built in 1889 by the same architect who designed Denver’s Molly Brown House, this Norman-like fortress was initially constructed for the banker Walter Dunning and was later sold to attorney Mitchell Benedict and his wife. 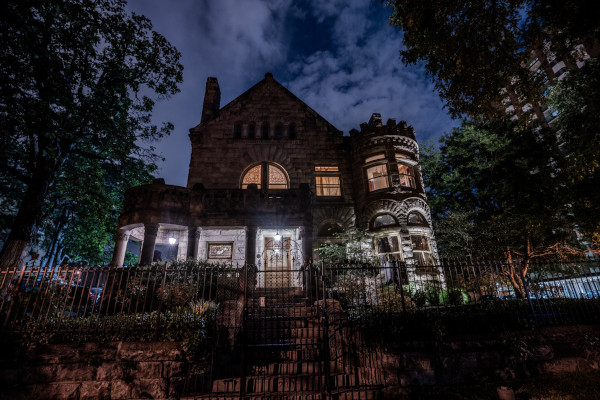 Built in 1889 by the same architect who designed Denver’s Molly Brown House, this Norman-like fortress was initially constructed for the banker Walter Dunning and was later sold to attorney Mitchell Benedict and his wife.

Benedict’s firm, Benedict and Phelps, was one of the biggest in the city and when he died in 1905, the house went to the hands of a Walter Scott Cheesman. It was in this era that things in the house began to get spooky…and affected the fate of its future residents for years to come.

A few blocks east from the house lies the beautiful Cheesman Park, named after Walter Scott. The park was initially supposed to be a cemetery but became a park after the land fell into disrepair. Though the city called for those who had loved ones resting in the area to make arrangements for the removal of the bodies, over 5,000 bodies were left unclaimed, so the city called on an undertaker to help remove the remaining corpses.

Like many at the time, the undertaker was overworked and underpaid and was forced to use too-small caskets and in some cases, chopped up the bodies in order to fit them. Soon, people began to take notice that the number of bodies removed and the number of bodies delivered weren’t adding up and an investigation of the undertaker and his team was launched, leaving the job unfinished. There are still over 2,000 dead bodies buried underneath the beautiful grass of the park. Their ghosts can often be spotted walking about the surrounding neighborhood, still searching for rest.

When Walter Scott Cheesman died, the house returned to the Benedict family who resided here for twenty years. However, since his death, Cheesman has yet to find rest and many of the house’s past residents have caught a glimpse of him traveling down the stairs, and disappearing through the front door.

Some have even been woken up in the middle of the night with goosebumps down their spine to find his ghostly figure standing at the foot of their beds, watching them as they sleep. He is trapped here on earth, unable to move on, forever haunted by the restless ghosts of the park that bears his name.

Ghosts of Residents Past

Since the time of Cheesman, the house has served as a hotel and later as apartment units.  Today, the building still has a few rental units that are available up on the top floor, while the bottom is used primarily as office space for a law firm. But the ghosts of residents past have been seen to occasionally lurk in and out of the walls across the building.

One extroverted being has been the known cause of multiple disturbing occurrences while another poltergeist has, at times, found humor in rearranging the furniture in an attempt to poke fun with the current residents of the house. He has been known to jokingly mess with window blinds or rearrange all of the artwork in the room.