The Croke-Patterson-Campbell House was built in 1891 for Thomas B. Croke, who, soon after moving in, found the house to be far more chilling than he liked. Due to his uneasiness, he quickly moved out and sold the house to Thomas Patterson. 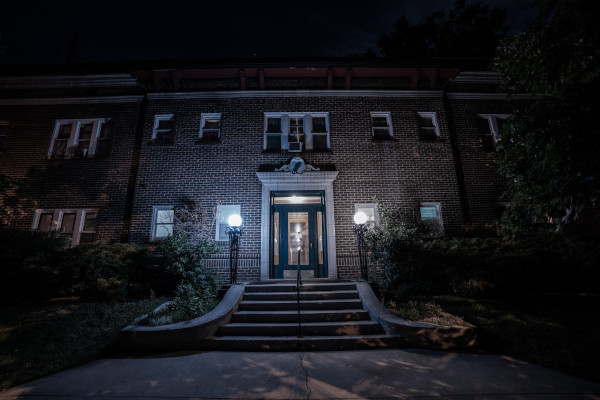 Haunted to the Bone

The Croke-Patterson-Campbell House was built in 1891 for Thomas B. Croke, who, soon after moving in, found the house to be far more chilling than he liked. Due to his uneasiness, he quickly moved out and sold the house to Thomas Patterson.

Patterson was a democratic Congressman who owned the Rocky Mountain News which he used to advocate his own policies to win the Senate seat over the republican party in 1901. He led a colorful political career for a few years and, when he retired, decided to return to his passion for printing the news.

The Ghost of Senator Patterson

After his death in 1916, the house passed into the hands of his daughter and son-in-law, Margaret and Richard Campbell, but Thomas’ ghost never left. Senator Patterson has been known to cause quite the ruckus when the papers are not printing something he finds scandalous or newsworthy.

Mysterious use of typewriters, phones ringing with no answer, lines being tied up altogether, have, to many of the guest and resident witnesses, all seemed like the attempt of the old newspaper owner trying to get an important message out.

Later, the house was turned into six apartments and the house, as apartments, was bought by Dr. Archer Chester Sudan, who had been named the state medical director of the Grand Junction and Ridge training homes. The doctor occupied two of the six units until, to the dismay of the house’s ghosts, he moved out to Boulder in 1957.

Since Dr. Sudan left, there has been no peace in the house. People have complained about objects flying through the room and of being awakened in the middle of the night to awful, loud noises coming from silent and sometimes empty units.

Many young couples who have lived here have had issues with their small children while in the house. According to reports, the children become wild and uncontrollable, seemingly possessed, with reports of one infant being mysteriously found dead.

After the poor dead child’s mother committed suicide, some began claiming to hear her crying out for her babe late at night. Another ghostly infant of the property has been forced to live out eternity around the carriage house where it was tortured to death, a disgusting experiment by a dreadfully tortured soul.

A few years back, during the house’s renovation, sightings of ghosts became more common.  Even the construction workers were unable to deny the house was haunted after their tools started going missing mysteriously. Even stranger was when the workers would spend all day completing a project only to return later to it having never been started.

These paranormal occurrences became so common that no one could be found to guard the house at night, so guard dogs were used instead on the property. That is, until one decided to jump to its death out of a second story window and two others were found soon after, also having committed suicide.