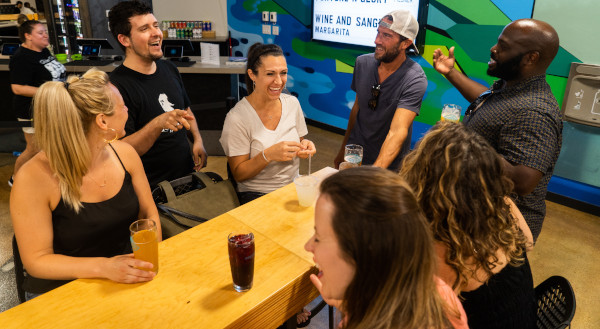 Try the new Boos and Booze Haunted Pub Crawl for some genuine scares, and for thrilling and chilling encounters with Texas spirits, and spirits,  in Dallas.

A Gathering of Texas Spirits

Ready to haunt the streets of Downtown Dallas and grab a drink? Dallas is known for its live music, fantastic art, delicious food, and, of course, cocktails! Despite the outward vibrancy of the city, the Dallas Main Street District is home to many spirits lurking around corners and within pristine historic buildings.

On our Dallas Haunted Pub Crawl Tour, you’ll learn about their stories as you stroll through the heart of DFW where skyscrapers light up the Texas night sky. Get ready for thrills paired with libations as we explore what makes Dallas one of the most haunted cities in Texas.

From the mythical story of the Pegasus to the conspiracies behind John F. Kennedy’s assassniation to the legend of the founder himself, John Neely Bryan, we’ll share the stories that give Dallas it’s quirky edge and explain why many of the areas of downtown are haunted.

It’s not surprising that there are random ghosts roaming the Dallas Streets. As industrialization expanded from the 1880’s to the 1920’s, early Dallas was a death trap for many reasons from citizens’ exposure to industrial toxins to the rampant spread of disease to blazing fires that ravaged the cityscape.

Learn More About the Boozy, Spooky, Boos-y Side of Dallas

Dallas is home to some of the most haunted spots in Texas, like the Adolphus hotel, that attracts paranormal chasers and spooky connoisseurs from all over the world. The city is also surrounded by haunted natural locations like White Rock Lake and Coombs Creek Trail, proving that you can’t escape the ghosts by retreating from the city center.

You may not notice anything strange about this historic district right away, but Downtown Dallas is filled with notorious spirits that have been trapped here for over a hundred years. Given the tragedies associated with these unfortunate souls, it’s no surprise that many of these ghosts just want their stories to be told — and we are more than happy to indulge them.

Check Out the City’s Must-See Drinking and Ghostly Hotspots

From popular watering holes like Pegasus Brewery, known as one of the best places to grab a local IPA, to Frankie’s Downtown, a beloved sports bar that boasts mouthwatering cocktails, we’ll show you our favorite spots to grab a cold one in Dallas’ Main Street District.

We’ll showcase Dallas’ gorgeous architecture, visiting spots like the Wilson and the Adolphus, both regal structures obscuring decades of secrets swirling inside. Dallas is filled with such
landmarks — beautiful on the outside and horrifying on the inside. Join us as we uncover the city’s secrets, bolstered by liquid courage. 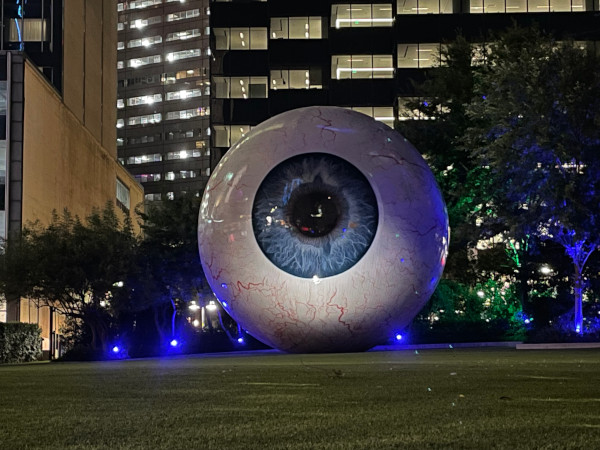 Artist Tony Tasset originally created this incredibly disturbing sculpture in 2007 before the Joule boutique hotel acquired The Eye in 2013 as the start of their sculpture garden. This massive eyeball is so large in fact that it is three-stories high and is seemingly watching everyone that walks in front of it.

Back in the early 1900’s, this location housed the Praetorian building, which was considered the first skyscraper in Texas. This 15-story, gold-ornamented building was opened in 1909 and was initially home to the Praetorian Order, a fraternal insurance company but while it seemed shiny and clean, the soul of a young woman is trapped here. 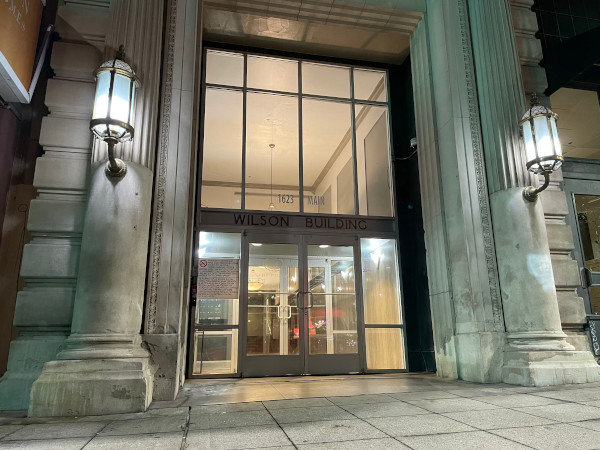 Originally designed and completed in 1904, the Wilson building has hosted medical offices, arcades, and large department stores and its design was inspired by the Palais Garnier in Paris.

When it was first built it was the tallest structure in all of Dallas from 1904 until 1909 and contained 9 elevators and intricate stone and brick detailed work, a lot of which has been restored throughout the years to its current glory. Today, it is still valued and is home to many new businesses in spite of the swirling rumors of its haunted past. 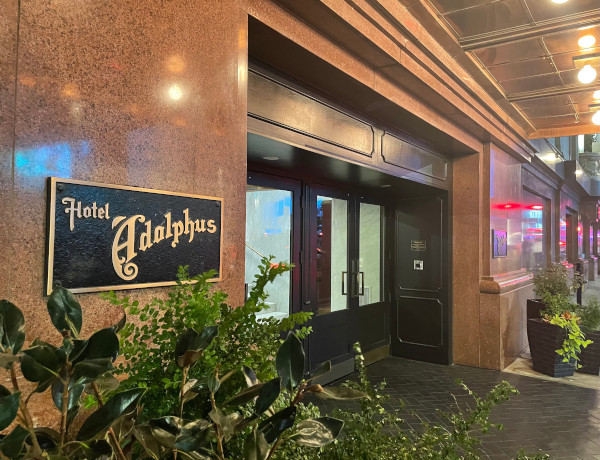 Arguably the most haunted building in the entire city of Dallas, the Adolphus Hotel is a historic luxury hotel that dates back to 1912. This massive hotel has been included on lists of the most haunted hotels in the United States and even sometimes internationally.

The hotel’s original owner, Adolphus Busch, was the founder of the Anheuser-Busch company, and envisioned this hotel to be the grandest hotel in all of Dallas. The Adolphus has hosted some incredibly famous people throughout the years including Oscar de la Renta, Babe Ruth, Queen Elizabeth II, and members of the Vanderbilt family.