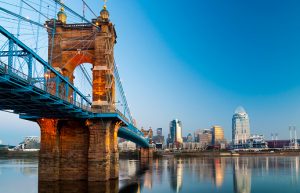 Cincy is notorious for being one of the most haunted places in America. From historical landmarks to old cemeteries, Cincinnati is home to some of the creepiest places in the country.

Below, you’ll become familiar with some of the most haunted places in Cincinnati.

What makes this city so unique when it comes to active paranormal activity? Perhaps it’s the vast amount of burial grounds and old buildings with deep histories.

Ghost tales, legends, and whispers abound throughout Ohio, and Cincinnati is no exception. However, despite a few of these claims being unfounded rumors, some stories have remained to be told throughout time, passed down from generation to generation.

Whether you believe in the paranormal or not, here are some scary locations to visit in Cincinnati

Why is Cincinnati haunted?

Cincinnati’s location — on the border of the free state of Ohio and the slave state of Kentucky — made it a prominent location for slaves to escape the slave trade.

Years of heartbreak, loss, fear, and anger could have contributed to the hauntings that plague the city today. Read on to find out about more specific locations!

This historic burial ground is the resting place for many of Cincinnati’s early quaker inhabitants.

Many historians believe that the ghost of a woman named “Eliza Lovett” haunts this historic site, where she was chained to a tree while her newborn child was killed. The ghost has been witnessed since the 19th century and has been reported to emit a mournful moaning sound.

A meandering little road off of W. Kemper Road is located near the Richardson Forest Preserve. Although there are many stories regarding what occurred in the area, everyone agrees that a woman named Amy was murdered there. The road is on private property and may be dangerous to drive on at night.

Another urban legend tells that if you shine your headlights on Lick Road while parked, Amy will write “help” in the condensation on your window.

William Dickson, was a lawyer, attorney, and judge from Cincinnati. A founder of the early Republican party, he assisted in the framing of the Emancipation Proclamation. He also formed and led the Black Brigade of Cincinnati that built a blockade to prevent Confederate troops from entering and attacking Cincinnati.

He died October 15th, 1889 at a hospital in Cincinnati. He was buried in his family plot at the Spring Grove Cemetery and will forever be remembered for his contributions to the war effort. Some say that you can still see him standing by his own grave.

Visitors to Christ Church Cathedral have reported that the statue of Mary comes to life when the church is empty. According to urban explorer RedGhost, the statue of Mary is constantly looking down at worshippers, urging them to pray, and smiling at you. While you’re visiting, check out the ghost of a little boy who roams the church corridors.

Taft’s Ale House is no stranger to the ghostlier side of things. In 1917, Robert Barnhart was invited to meet the brother of his future wife by John Paul Jones, the uncle of then-Cincinnati mayor J.J. Barnhart. They took a carriage ride along Lytle Street. When the carriage arrived at Cincinnati City Hall, where the wedding was to occur, something went terribly wrong. Barnhart was pronounced dead at the scene. His wife died a month later.

Staff and visitors to the ale house report strange breezes, disembodied voices, and even full-bodied apparitions. Who are these spirits? You’ll just have to visit to find out!

Random, inexplicable scratches on different surfaces have been reported, as have sudden temperature changes. During her time working at the shop, owner Terrie Scott claims an unknown force pushed her.

The home’s Facebook page has been in many television shows, including Ghost Adventures, Haunted Collector, and My Ghost Story.

The market has been known to have the presence of dark spirits and has been reported as a hotspot for paranormal activity. According to locals, an Irish pub frequented by the ghosts of several brave members of society is the most popular haunt at Findlay Market.

Also, the market is rumored to house a Native American spirit that keeps an eye on the market and the swans that flock to the market at dusk.

The Cincinnati Music Hall, built-in in 1891, is one of the largest and oldest performing arts centers in the United States. In the early 1900s, vaudeville shows were the highlights of the building, and performers were often dressed in their theatrical attire.

Today, the hall still features stage acts, musical performances, and plays but also has a long list of recorded paranormal activities. Some ghosts include an infamous siren and stagehands, have been said to haunt the historic venue.

This center helps people understand that though our country was once a place that enslaved African-Americans, the change in laws helped people overcome slavery, and that the Underground Railroad and its importance cannot be forgotten or lost to time.

It’s important to remember that the scary factor of haunted places in Cincinnati does not come from the paranormal activity; it comes from the areas’ past and the people that made those places what they are today.