The Old Granary Burial Ground is the third oldest cemetery in Boston. Explore this historic landmark and its Revolutionary past on a ghost tour with USGA. 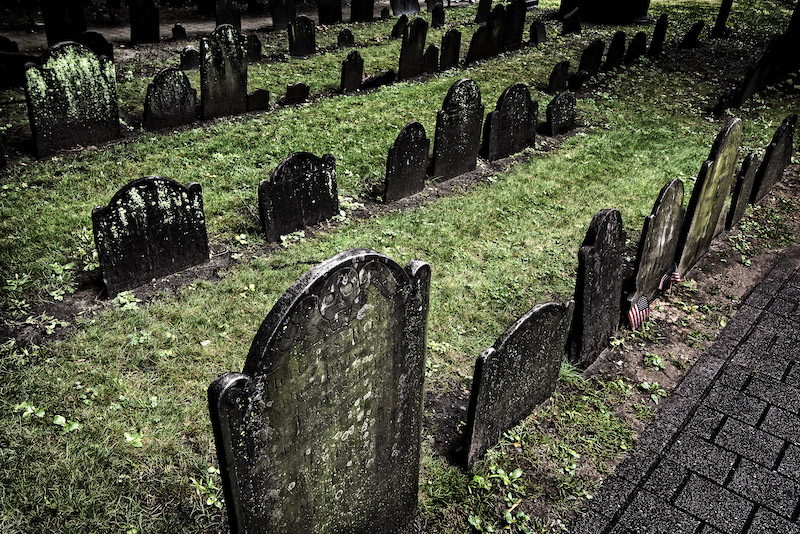 Being one of the oldest cities in America, Boston has quite a fascinating past—one peopled with ghosts. From massacres to witch hunts, there are endless tales that solidify its reputation as one of the country’s most haunted towns.

The Old Granary Burial Ground’s history dates back to 1660. It was developed to replace the King’s Chapel cemetery since it had run out of room. Before becoming a burial ground, the area held livestock. The location was once a part of the Boston Common, the oldest public park in the United States.

Surrounding the area were public houses and buildings. In 1737, the lot was officially named the Granary Burial Ground. People were laid to rest in the burial ground for roughly 200 years, the last being in 1880.

Like most places in America, the cemetery went through renovations during the Victorian era, intended to protect the site from growing problems like grave-robbing and trespassing onto the grounds. Moreover, the remodeling would prevent the graves from unearthing and flooding into the streets during a heavy rainstorm.

The project completely transformed the aesthetics of the cemetery. Before, it was nothing short of a small farm field. It eventually became a historical park in 1830 where people could walk around respecting the dead.

Being one of the oldest burial grounds in America, it’s natural that some of the country’s prominent figures were laid to rest in Old Granary. You can find the graves of Benjamin Franklin’s parents along with famous Founding Father John Hancock.

Moreover, three people who signed the Declaration of Independence call the cemetery their eternal resting place. As a result, it’s worth a visit if you’re a US history buff in Boston.

Given that many people laid to rest at Old Granary lived through some of the roughest years in Boston, it’s safe to say that some of those spirits are still haunting the grounds.

Many people claim they have experienced an unsettling feeling while visiting the cemetery at night, and some even claim to feel like someone or something is watching them.

Whether it’s Revolutionary spirits or something a little less patriotic, you’ll have to uncover for yourself on a US Ghost Adventures tour of haunted Boston.

Boston is a city famous for a vast array of things. Whether it’s Fenway park, lobster rolls, or old colonial spirits, you can find it all in Beantown. See the Old Granary Burial Ground and numerous other haunted locations on a Boston ghost tour.