If you’re looking for a royally good scare in Boston, check out the King’s Chapel Burying Ground. Join US Ghost Adventures for more on Boston hauntings. 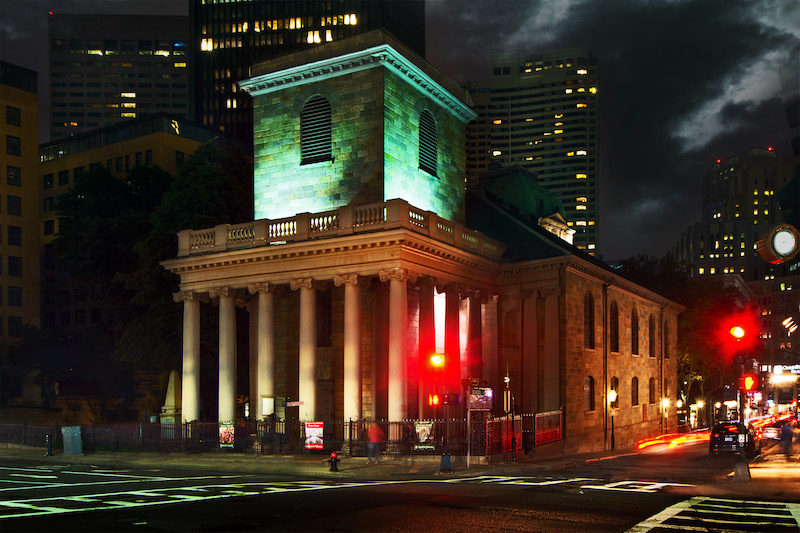 Considering the city’s history, it’s no surprise that Boston contains numerous haunted destinations. The King’s Chapel and Burying Ground is one of the city’s most popular, and for good reasons.

From tales of headless women and eerie sensations, we had to add this ghostly gem to our tour.

Continue reading below to see what waits behind the iron gates of the King’s Chapel and Burying Ground in haunted Boston, MA.

Brief History of the Chapel and Cemetery

Developed in 1639, the King’s Chapel Burying Ground is officially the oldest cemetery in Boston. Before becoming a spooky cemetery, the grounds were originally a garden created by the landowner Issac Johnson.

Johnson was an early Bay Colony settler with a deep love for his garden. Before passing, it was his dying wish to be buried among his plants in his pumpkin patch. And he got his wish, as Johnson was the first to rest at King’s Chapel.

The garden eventually became a cemetery and was the only resting place in the city for three decades.

Like most cemeteries at that time, the King’s Chapel Burying Ground was unsightly, with graves scattered at random and virtually no walkway for visitors.

The cemetery got a complete makeover during the Victorian era. Eventually, it became a beautiful place with plants, flowers, and many walking paths so people could pay their respects to the dead.

Although the ground looks peaceful from the surface, some bone-chilling stories might make you hesitant to enter. The most popular one is that of the headless madam.

An African-American woman was set to be buried in the cemetery. However, the person designated to craft realized the dimensions of the casket were way off, so he decided to cut the corpse’s head off instead of redesigning a new coffin. This act of desecration interrupted her peace, and some claim it is why she now roams the cemetery headless, scaring off visitors.

Another spirit that allegedly roams the grounds is that of a man who was buried alive. While there’s no direct evidence that this happened, it created quite a buzz during the 19th century. Moreover, being buried alive during that time wasn’t exactly uncommon.

Many graves came with a ringing bell that you would ring if you were accidentally placed in the ground too early—not the best assurance that you wouldn’t be buried alive.

Boston has plentiful historical landmarks, from the famed Boston Harbor to Fenway Park and many delicious seafood restaurants.

You can also add thrills to your time in The Hub with our Boston ghost tour. See King’s Chapel and Burying Ground and numerous other attractions on a tour of haunted Boston with US Ghost Adventures.