The Boston Athenaeum is one of the hottest attractions for ghost lovers in the city. Come explore this spooky landmark on a tour with US Ghost Adventures. 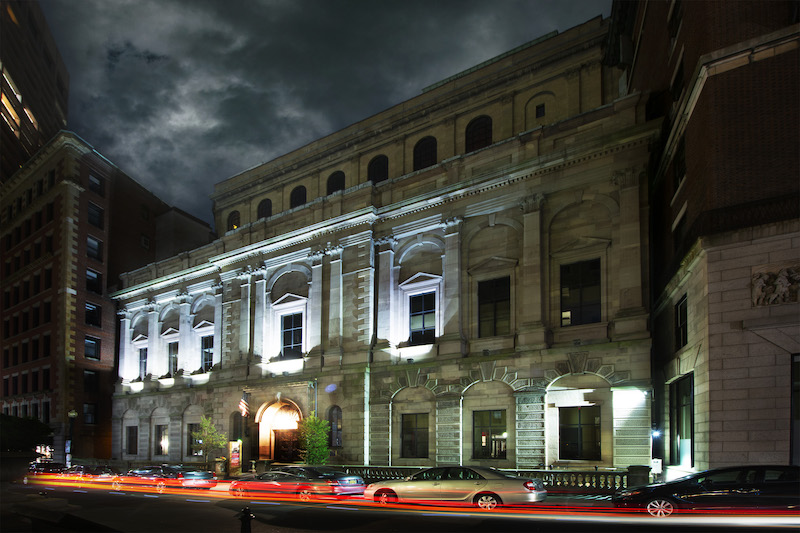 When it comes to haunted landmarks, the Boston Athenaeum offers everything you would expect. From a full view of the city’s cemeteries to a book made from human skin, there are countless thrills to experience at this popular haunted destination.

The late Reverand Harris supposedly haunts the Athenaeum. However, the hauntings aren’t necessarily the sinister type you’d find in a horror movie. Many people claim to feel enlightened and at peace when they visit the Boston Athenaeum.

Explore the historic, haunted, and odd happenings at the Boston Athenaeum with US Ghost Adventures. Our tour of haunted Boston unveils the history behind the hauntings for an enriching journey into the past that you won’t find even in a book made from human skin.

Facts About the Boston Athenaeum

The Athenaeum was founded in 1807 under the generosity of the Anthology Society of Boston. This organization started with a humble vision to create a reading room, using the Athenaeum in Liverpool, England, as the inspiration for their room. Their plans soon expanded to include a library, art galleries, and holding rooms for collections of coins and various curiosities.

And curiosities they collected, indeed. Perhaps the most intriguing factor of the Boston Athenaum is the book made from human skin. Binding books in human flesh is a practice known as Anthropodermic Bibliopegy. You can find a book like this at the Athenaeum, and it contains the chronicles of the author whose flesh lines the cover.

Today, the Athenaeum is considered one of the oldest libraries in America. You’ll mostly find books on early English literature and New England history.

The first spirit encounter happened during the mid-1800s when famous author Nathaniel Hawthorne claimed to see the ghost of the late Reverend Harris in the reading room.

Harris was a Unitarian minister who often frequented the Athenaeum with a copy of the Boston Post. He and Hawthorne did not know each other, but presumably, they saw each other there on occasion. Then one day, Hawthorne’s friend informed him of Dr. Harris’s passing—but Hawthorne saw him later that day in his usual seat.

While Hawthorne’s sighting was nearly two hundred years ago, people have claimed to see spirits in the library in recent years. Some reports state that a man dressed in black frequently waits by the elevator. Others say they too have seen the apparition of Reverend Harris, and that he claims to be in good spirits.

With all that jazz, we had to make it one of the stops on our Boston ghost adventure.

Boston is rich in history and chock-full of contemporary attractions for bibliophiles, historians, and patriotic tourists excited by its Revolutionary past. But another way to spice up your time in Beantown is to take part in our Boston ghost tour. We’ll take you to the Boston Athenaeum along with several other of the city’s most haunted landmarks.