Top 10 Most Haunted Places in Austin 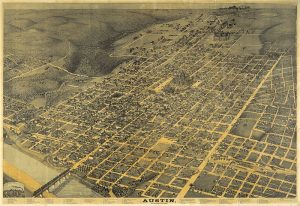 The top 10 most haunted places in Austin give you a look into the mysterious historical past of the Lone Star state. Austin is one of the most haunted cities in Texas. From massacres to mansions, these are the top 10 spookiest, haunted hotspots you will find!

Imagine finding a slab of land alongside a nice little creek where you decide, “this is where I want to build my family a cabin.”  That’s what Gideon White thought in 1839, despite several warnings by others.  And that’s precisely what Gideon White did.

A few years back, Sarah White had escaped capture by the Indians. As retaliation, they gutted her husband and threw his body in the creek.  Ignoring this, Gideon and his family moved into their new home.  The three family members were found three years later beaten to death by a band of passing Indians.  When they were digging graves for the family, a mass grave was found underneath.  Most were victims of cholera and yellow fever, but the bodies on top had been savaged.

Digging up the bodies woke up the spirits, and now the area has a plethora of unexplained phenomena.  Disappearing apparitions, unusual cold spots, unexplained noises, and shrills are just to name a few of the experiences of park visitors.

But the most famous haunting of the area is Gideon himself. Not only do people see his ghost, but they also hear his screams of terror.

The paranormal activity is so intense, people are not allowed to visit the creek after 10 p.m.

As it’s become known to locals, The Pearl was initially built by Judge Charles J. Wilcox in 1896.  Eventually, like many homes from that era, it went through a series of renters, including a housing co-op.  The house was demolition-worthy by the 1980s but was spared its demise in 1996.  The house was bought and given a significant overhaul, turning it into a boutique Inn, and the rest is history.  Well, a haunted history, that is.

It’s not sure who the woman ghost that roams within the walls is. Some accounts say she is a happy, friendly spirit that carries around her baby, or babies, and sits in a rocking chair rocking them to sleep.  Other reports say the woman is in despair and crying with no baby or babies in her arms.  Either way, she is there.  Perhaps the babies died at some point, and she appears both before and after a tragic incident. Other hauntings of the Inn include loud banging noises, names whispered, music playing, lights turning off and on, and the sound of wailing babies.

Undoubtedly a Governor’s Mansion will have a historical background. Still, not all have a haunted history behind them like this one.

The Governor’s Mansion in Austin was rebuilt after an arson fire in 2008.  It was a new awakening for the mansion and also for the ghosts that reside within.

Two former Governor’s once occupied the mansion, and apparently, they haven’t moved on.  Governor Sam Houston likes to hang out in his old bedroom. At the same time, Governor Pendleton Murrah is seen throughout the mansion and grounds.

The most famous ghost is that of a 19-year-old serviceman that was a guest at the mansion who killed himself in the guest room after Governor Murrah’s niece refused his marriage proposal.

Hauntings in the room include moans, groans, someone gasping for breath, rattling, and turning doorknobs.  The room was sealed off at one time by one of the Governors due to the disturbing noises.

As if politics aren’t scary enough, this State Capital has a frightening haunted history to boot.

In 1903 Comptroller Robert Marshall Love was shot and killed by a disgruntled employee while sitting at his desk.  His spirit is seen by his old desk and throughout the capital, startling guests, and state troopers.

The Lady in Red is as famous in death as she was alive, apparently. Her ghost is seen in a secret stairwell, looking for a rendezvous with her lover.

Growls and scraping noises late at night scare the night staff as they pass by locked rooms.

Once a Radisson Hotel, the building underwent a facelift in 1996 and became the Omni Hotel.  Most hotel hauntings don’t start at the beginning of the business, but that’s not the case for this hotel.

Despondent, down on his luck salesman “Jack” stayed at the new hotel during his travels from state to state.  Unable to hook a single sale in two months, coupled with a phone call from his wife, who wanted a divorce, Jack began to hit the minibar in his room.  Downing several Turkey’s and several more of his namesake, Jack finally passed out. He awoke to a loud banging noise at the door.  It was the hotel concierge, room tab in hand, telling him he was well past check-out time.

Jack simply couldn’t afford his bill.  With all his woe’s, he took a swan dive off his balcony, ending his life.  Well, his worldly life anyways.

Immediately after Jack’s death, his spirit returned as a ghostly apparition throughout the hotel.  Housekeeping entered the room after the police had left and quickly left feeling someone was in the room and someone was watching them.  The room remained vacant, and both hotel night staff and guests in nearby rooms could hear Jack scuffling around and moaning.  When the room was used again, a woman guest reported the creepy vibe, a feeling of someone next to her, and a sensation of being kissed while trying to sleep.

Poor Jack.  His tab was never paid, and the record remains on the books.

One wouldn’t think a University would have a haunted history, but it’s an everyday occurrence for this University.  The past is full of tragedy, and with tragedy, hauntings of the unrest can follow suit.

At least three specters haunt the halls of the University.

A student committed suicide in the Mary Moody Theater by hanging themself.  Students and faculty report seeing the student’s ghost in the theater, hanging from where they died.  Sounds of rope creaking as it’s swinging back and forth are common in the theater.

Another student fell from an unsecured window fixture when he was trying to fetch his painting taken off by a gust of wind.  Students report a shadowy figure that opens and closes the windows on the upper floors.  Strange sounds of wailing and crying are heard from the top floor of the main building.

Teresa Hall is home to the third ghost.  Eye-witness accounts say the 12-year-old spirit Danielle has long black hair and is wearing a white dress. She approaches new students asking them if they want to play and hang out. It’s said she is a poltergeist and will follow you around if you decline to play with her.  She whispers in your ears and flicks the lights off and on.  Eventually, she tires and moves on.

The Driskill Hotel was built in 1886 by Civil War Colonel Jesse Driskill, a cattleman with more money than God.  Driskill loved the bottle, women, and gambling.  And that’s why he lost the hotel in a card game.  It’s no wonder Driskill sticks around the hotel in the afterlife.  His ghost has been seen in the middle of the night, staring out a guest room window, puffing away on a cigar.  When lights come on, he is gone.

Another hotel ghost is a young woman whose fiancée called off their engagement in the 1990s.  After a reported 40K shopping spree, the woman lined up her purchases on the bed in her room, pulled out a gun, and shot herself.  A perfect fit for a ghost seen walking the halls with her bags in tow.

A child plummeted to its death over a balcony chasing after a ball.  Giggles and sounds of a bouncing ball have been picked up by paranormal investigators.

Room 525 has the most paranormal activity, hands down.  Two brides committed suicide in the room twenty years apart. Ghostly apparitions, unexplained leaks, sensations, distant voices, and unexplained noises are all heard in the room closed up until renovations in 1998.

Although the Tips family once used this house as their home, the structure is now home to dark menacing entities that many believe make the structure uninhabitable as a home.  The house was moved to a different location, which may be why the ghosts appear so angry.  AT any rate, now used as a bank, the employees keep “banker’s hours” and avoid being in the bank at night.

The house gives people the distinct feeling there is a presence there that doesn’t want them inside.  If the place accepts your presence, you’re fine.  But overall, it’s not keen to anyone who walks up the front steps and enters the building.  It’s said the house can either draw you into its realm or drain your energy.

Established sometime in the 1850s, Oakwood Cemetery has over 23,000 buried people within its gates.  Like all cemeteries, not all have passed on.

Eula Phillips was a 17-year-old girl murdered with an ax by a serial killer who was never caught.  Psychics have sensed her ghost at night, confused and wandering around frightened and crying, not realizing she had died.

Confederate General Thomas Green’s ghost is seen decked out in military garb, wandering around his headstone.  Various recordings of phantom hoof beats may mean Green is stuck in a realm repeating his death over and over, charging against a gunboat.

Susannah Dickenson survived the Alamo and lived to age 68. Buried in Oakwood, her apparition is the most clearly seen.

In 1893 Alice and George Littlefield moved into the grand Victorian home where they lived until their deaths.  The hauntings in the old house are believed to be Alice, who some believe may have been agoraphobic and seldom left the house.  Her spirit is seen throughout the home and sounds of moaning and singing are heard within the walls.  An eerie oil painting of Alice hangs in the house that people say has changing eyes.  Sometimes the eyes look outward, and sometimes, they look to the side.  Frightened screams, footsteps, cold spots, and just an overall sensation of a presence or being watched are all reported in the house.

Read more about haunted Austin in our Austin Haunts blog for a more in-depth look into the haunted history of the Lone Star state.