Saint Mark Methodist Church is one of Atlanta’s most famous chapels. We dig into the church’s past to uncover its haunted secrets at US Ghost Adventures. 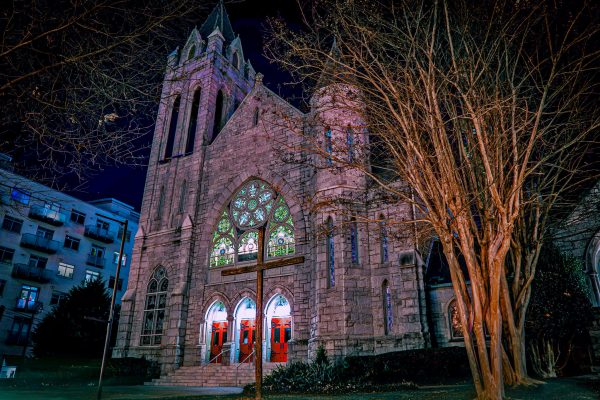 Although churches like to stay away from the idea of ghosts and haunting, there’s no denying that old churches can be pretty eerie. When you combine that with countless reports of ghost sightings in churches across America, it’s safe to say that a church is a prime spot to see a spirit.

Saint Mark United Methodist Church in Midtown Atlanta is no exception. On a tour of haunted Atlanta with US Ghost Adventures, you can learn about the church’s past and see if any spirits may still be lurking.

The history of Saint Mark’s is as rich as the history of Atlanta. Opening originally as a mission in 1872, Saint Mark’s has gradually become one of the most famous chapels in the state. The mission was east of Peachtree Street, a part of town notorious for housing thieves and criminals.

However, the story of Saint Mark’s doesn’t get exciting until the early 1900s. The congregation had outgrown its previous location and needed a bigger space to house its worshipers. The lot on Peachtree and fifth became the now-famous Saint Mark United Methodist Church.

Today, Saint Mark’s is known to be an extremely welcoming congregation. They go above and beyond to invite people from all backgrounds to worship together to bring the community closer.

From the surface, the chapel is beautiful and enticing. However, things can get quite spooky at night.

Many people claim to see spirits roaming around the church grounds once the sun goes down. People believe that they’re the ghosts of regular churchgoers from the last century.

Given that there are countless reports of ghost sightings, we had to add it to our Atlanta ghost adventure.

There are various reasons to visit Atlanta, whether it’s the music scene, food, historical sights, or spooky hauntings.

Discover the chilling side of the city on our Atlanta ghost tour. We’ll take you to the Saint Mark United Methodist Church and numerous other popular haunted destinations in Georgia.