Top 10 Most Haunted Places in Atlanta 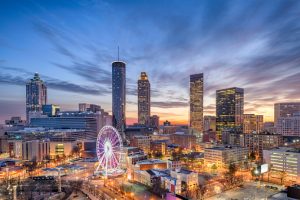 Suppose you’re looking into the top 10 most haunted places in Atlanta. In that case, you’ll find a plethora of ghost stories steeping from its rich history from the Civil War to the Civil Rights Movement in the 1960s.  Take a step back in time with us because we’ve got the goods on the ghosts of Atlanta!

Atlanta’s long, complicated past is often reflected in the beauty of its architecture.  A great example of this is Bulloch Hall. Owned by Major James Stephen Bulloch, this grand structure was constructed in 1839 by slave labor.  The tall, white house with massive Grecian columns represents the old-fashioned ways of the Old South.  A piece of history remains at Bulloch Hall.  Locals say a ghost of a young teenage slave girl haunts the property.  Her body was found when a well was uncovered. Though she has since been laid to rest, many attest to her ghostly presence.  Flickering lights off and on and laughing at unsuspecting tourists are her ways to capture the attention of the living.

Along with this mischievous teenaged ghost are the spirits of Confederate soldiers.  Visitors and volunteers report seeing them peering from the windows of Bulloch Hall.  Perhaps they don’t know that they died, and the war ended long ago.

Some of Atlanta’s oldest ghosts remain at the battlefield of an important Civil War battle.  With the rolling hills and lush green trees of today, you’d never know it has such a bloody history.

The war cries polluted the battlefield from June 19th to July 2nd, in 1864.  When all was said and done, over 5,000 soldiers lay dead.  As with a lot of haunted history, many spirits of the dead have stuck around, unable to find rest.  Hikers report Confederate soldiers in bloody war-torn clothing walking through the park.  Thinking they are part of a Civil War reenactment, many who try to get a closer look say the soldiers vanished before they could get to them.  Area residents say soldiers in Confederate uniforms have materialized in their homes.  It seems the soldiers come and go as they please, perhaps looking for a final resting place or not realizing they’re dead.

Initially intended as headquarters for the Atlanta Shriners when it was built in 1928, the Fox Theatre boasts a mosque-like structure and ornate design.  The lavish event and performance venue was leased to movie mogul William Fox. He converted the cavern-sized forum into a movie palace where today, events, live performances, and ghosts from the past are housed.

An old organist’s ashes were scattered in the theatre, and his spirit is said to linger behind.  Staff reports hearing his favorite tunes after hours when no one should be there.

The elevator is possessed by the ghost of a former employee’s girlfriend.  When guests have tried to ride the elevator to the second or third floor, the elevator takes them to the fourth floor, where she supposedly died.

Staff also report the sounds of footsteps in the audience when the theatre is empty and a ghostly face watching them from the dark.

Although an unconventional entry on the list of haunted places in Atlanta, the park is seriously haunted.

In the 1970s, a young girl was killed by a car near the park. Her ghost has returned to ask for help.  Guests claim she is sometimes bloody and seems confused.  When the guests try to direct her, she vanishes into the crowd.

The park’s music hall, the Crystal Pistol, is home to an actor named Joe who once worked there.  Legend has it Joe died on his way to work, and his ghost haunts the balcony.  He shows up in photographs and is heard singing after hours. Joe is credited for putting missing props behind the building on the railroad tracks, slamming doors, and footsteps running up and down the halls.

Formerly the Village Inn, the Stillwell House is not only the oldest remaining building in Stone Mountain, but it’s also the most haunted.  Like many buildings during war times, it was once converted into a hospital during the Civil War.  No longer operating as a bed and breakfast, the 1820c building remains a historical landmark of Atlanta.

Original owner Reverend Jacob Stillwell was a tall, imposing figure rarely seen without a cigar in his hand.  Guests report a male presence in the house that’s believed to be Reverend Stillwell.  Reports of lights turning on and off, pictures falling from the walls, and cigar smoke smell are all signs of the Reverend’s presence.  Photo’s guests have taken often show a face peering in the background.

Henry Foster was the town grocer and sheriff who initially built the house in 1887.  He lived in the house with his wife and their seven children. The Foster House was renovated in 2003 and now operates as a favorite eatery.  When Foster and his son died of typhoid fever, their spirits remained in the home.  A man in overalls and a woman in a dress have appeared and disappeared into the walls.  A young boy is seen with a music box playing an eerie tune until he slams it shut.  Levitating silverware and a broom standing on its own are other ghostly activities seen in the house.

The Beverly Hills Apartments was built in 1929 and was once used as a home for aging widows.  It seems three former residents long dead have stuck around to ward off new tenants.  Not taking too kindly to the new residents, these three cantankerous souls smash drinking glasses and whisper warnings to get out.  Strange glowing orbs are seen floating from room to room, particularly on the third floor.  The ghostly trio seems to search out new residents that are rowdy and disorderly.  You best mind your manners and keep the noise level down if you visit the apartment building. Who knows what the old, widowed ghosts will do next!

When millionaire Amos Giles Rhodes designed his fortress for himself and his wife Amanda, he spared no expense.  The couple lived secluded within the walls of their home the affectionately referred to as “the dream.”  The house is lavishly decorated, including a stained-glass mural depicting the rise of the confederacy.

Apparently, Amos and Amanda loved their house so much they never left.  Even after their deaths inside their beloved home.

Hauntings include a tour guide being stalked on the back staircase by the ghost of an old man believed to be Amos Rhodes screaming, “GET OUT! GET OUT!”  The guide quit her job over the phone the following day and never returned.

Another tour guest reports a run-in with Mrs. Rhodes.  Separated from her family during the tour, the room she was in began to shake.  A mirror she glanced in had the face of Mrs. Rhodes, old and gray superimposed over her own face. Knocking pictures from the walls and she ran from the room, shrieking in fright as furniture began to move and pictures fell from the walls.

Much like the Titanic wasn’t supposed to sink, so it was believed that the Ellis Hotel (formerly the Winecoff) was supposed to be fireproof.  However, in 1946, that wasn’t the case.  More than the belief that the hotel wouldn’t burn down despite having any sprinklers or fire exits, fire ladders could only reach the 8th floor of the 15-floor building.  Of the 280 guests that night, 119 perished in the fire. Or at least from smoke inhalation that billowed through the building.

The fire remains the deadliest hotel fire in the history of the United States.

One can only imagine how the tortured souls of the lives lost must feel.  Disembodied footsteps, the smell of smoke, and workers on the job’s tools going missing are all blamed on the ghosts of the horrendous fire.  Many claims of faces screaming in terror are seen in the windows of the hotel.

The disaster is referred to as “The Titanic on Peachtree Street.”

The oldest and largest cemetery in Atlanta, Oakland Cemetery, is Atlanta’s iconic and historical landmark.  Three thousand unnamed Confederate soldiers are watched over by an enormous stone “Lion of Confederacy.  Despite the massive beast watching over the graves, paranormal activity abounds within the cemetery gates.

Confederate soldiers are seen wandering about after dark, most likely unable to pass on from their unmarked graves.  Torture of not only not knowing where they are but also who they are. A Confederate soldier is seen hanging from a tree. One visitor report hearing a Confederate roll call that ended with his own name!

Police took on the paranormal in the cemetery and were assigned to patrol at night.  One officer was driven insane, and several others couldn’t stand more than a few shifts at the cemetery.  Strange shadowy figures, voices, and the alarm bell for gravediggers to be alerted to an arriving Hurst sounded in the middle of the night.  Even after the police officer dismantled it.

Atlanta is truly one of the most haunted cities in the entire country!

http://A Nightmare on Peachtree Street: Reports of Hauntings in and around Atlanta – The Signal