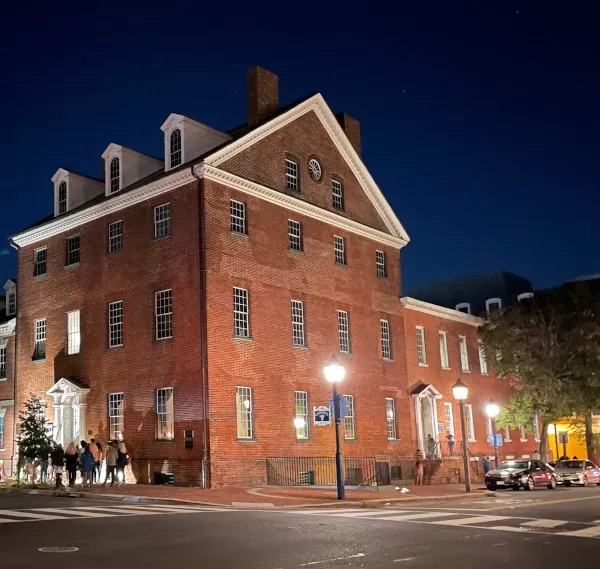 Today a museum, Gadsby’s Tavern was a staple of late 1700s Alexandrian life, offering good food and a place for business, political, and social gatherings. The ghost that haunts Gadsby’s Tavern is one of the best known in Alexandria, not because of who she was or what she did, but because of the mystery surrounding her identity.

No one knows who she was since the inscription on her tomb states: “To the memory of a Female Stranger… this stone was placed here by her disconsolate husband.” Why would her husband label her as “a Female Stranger” rather than immortalizing her name?

In 1816, a mysterious couple sailed from the West Indies into Alexandria, a man accompanying a woman overcome with a deadly illness. Hoping to find treatment, they rented room 8 in what would become Gadsby’s Tavern and called upon Doctor Richards to help.

Unfortunately, the doctor could not do much, and the female stranger died on October 14th, 1816. Her husband buried her in this city, creating the tomb that stands today and cementing her place in history. To pay for the female stranger’s grave, the man borrowed $1500 from Lawrence Hill, handing him a forged note from the Bank of England in return. By the time Hill realized what happened, the man had already left town.

Candle in the Window

After her death, the Female Stranger began appearing in Gadsby’s Tavern. Passersby have seen her in the windows holding out a candle and wandering around the tavern, using it to light her way. Reports also place the Female Stranger standing next to her grave.

One night, at the tavern’s Birth Night Ball to celebrate the first president’s birthday, a guest reported seeing a very sad, very pale woman with black hair lurking in the corner. At the ball, guests dress up in 18th-century  clothing and her 19th-century clothes made her stick out.

A few years later, a guest at another ball reported seeing a similar description of the female stranger. He immediately approached her, never taking his eyes off the woman, and when she walked out of the room, he quickly followed her so that she would not be lost.

He followed her out into the hallway and into room number 8, which he found empty. The only thing he saw in the room was a lit candle on the bedside table, dangerously close to the edge.  The guest reported the rule-breaking open flame to the Master of the Ball but when they entered, the candle’s wick was completely white.

There are many theories about who this woman is, including a Napoleonic princess or even Theodosia Burr, daughter of Aaron Burr. One document, the narrative of John Trust, may provide an answer, claiming that the woman is Blanche Fordan, an orphan from Martinique who was adopted when her mother died in childbirth.

While there, Blanche fell in love with John Trust while drawing the attention of John Wroe.  Overcome with jealousy, Wroe “bewitched” Blanche and sailed to America with her. While on the boat and under a trance, Blanche married Wroe, catching a fever at sea while onboard. So why is she unnamed on her tombstone? Apparently Blanche, Trust, and Wroe were all siblings.

How’s that for a scandal?